An introduced plant taking over in Hawaii

Beware of this invasive vine

Above Photo: Maui News
It seemed like a good idea at the time. The Natural Resource Conservation service recommended a tropical vine, glycine, be introduced in Hawaii back in the 70s to improve pastures and forage for farms and ranches. It has since grown out of control according to the Maui Invasive Species Committee, swallowing up old structures, covering guard rails and signs.

Why Invasive Species are a problem in Hawaii

Hawaii is like no where else on earth due to its volcanic origin and distance from other land masses. Native plant and species are those that arrived here by floating on the waves, being blown by the wind, or transported by traveling birds. The journey was long, with only a few species landing and thriving over the island’s 70 million year history. Today, we still have many species that are found nowhere else in the world, including ohia and koa forests, and the hoary bats, ‘i‘iwi, and ‘apapane. 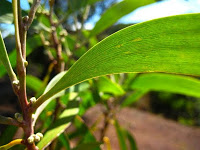 Without competition, species did not develop mechanisms, such as thorns or toxins, to protect against predetors.

When nonnative, competitive species from other parts of the world are introduced into our Hawaiian ecosystems, native species are vulnerable to disease, destruction and extinction.

So, what may look like a benign plant to help ranchers feed grazing cattle, may end up forcing native species out of extinction.